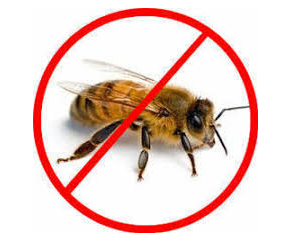 Like wasp, most bees have functioning stings. However, unlike wasps, they are dependent on pollen as a protein source and on nectar or sometimes oils from flowers as an energy source. In fact, bees are the most important pollinating insects. Adult females collect pollen primarily to feed their larvae but also for their own food. The pollen they inevitably lose in going from flower to flower is important to the plant because some of it lands on the pistils of other flowers of the same species, achieving cross-pollination.

During spring and summer, bees pose a considerable risk to some businesses. The following are the common reasons why you need to control bees: 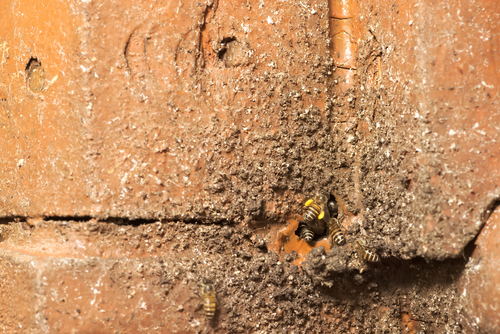 The earlier you locate a nest the easier it is to remove it.

Do not try to get rid of bees yourself – this should always be left to a professional. Contact Select Pest and Termite Control or call us at 0411 447 188 for help.

Some bees live in large colonies consisting of females; males play no part in the colony’s organisation. The great majority of bee species, however, are solitary, each female making its own nest and storing provisions for its larvae. Other social patterns also occur. Thus,certain kinds of bees are communal. They are like solitary bees, except that several females of the same generation make use of the same nest; each, however, makes its own cells for housing its eggs and larvae. In addition, a few kinds of bees are semisocial, that is, they live in Small colonies of two to seven bees that are of the same generation. One is a queen, or principal and layer, and the others are workers.

By contrast, The eusocial bees live in colonies consisting of females of two generations: mothers (queens) and daughters (workers). Probably 1,000 or more species of bees live in small colonies consisting of a queen and a few daughter workers,  with the castes scarcely distinguishable. Such species, cold primitively eusocial, form temporary colonies that normally break up in autumn, with only z fertilized queens surviving the winter. Bumblebees are familiar examples.

Also, a few hundred species of eusocial bees form colonies in which the queen and worker castes are markedly different in structure, each specialised For its own activities and unable to survive without the other, so that the colonies are permanent.

The primitive bees, like the wasps from which they arose, are solitary. Each female makes its own buro and cells, and each cell is provisioned with a mass of pollen moistened with nectar or oil. When enough food is accumulated in a cell to provide for the young bee from egg hatching until the larvae reaches full size, the female lays an egg in the cell, which it then seals before going on to construct another cell.

Communal bees make similar nests and the cells, except that the nest itself (usually a burrow in the soil)  is occupied by several bees. Sammy social and most primitively eusocial these also make nests and cells like those of their solitary relatives, except that construction and cell provisioning are often joint projects. In the colonies of bumble bees and the highly eusocial bees, however, the cells are made at least in part of wax secreted by the bees. in bumble bees and true honeybees, the feeding of larvae is progressive; that is, cells are opened as necessary or are left wide open so that workers can tend the larvae. Bumblebees and highly eusocial bees are also the only groups of bees that store honey and pollen for adults as well as larval consumption. 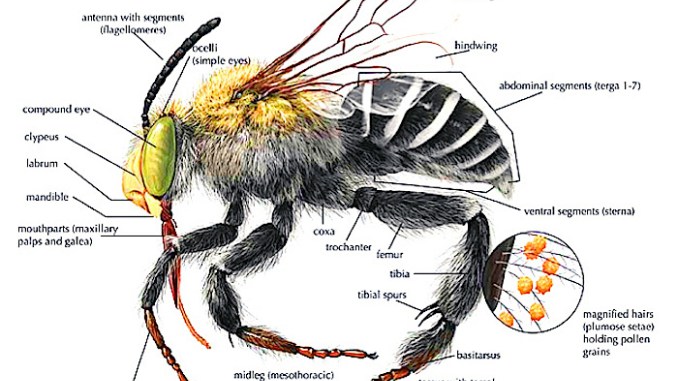 Bees are divided into a number of families, largely on the basis of mouthparts and other characteristics that are difficult to see without dissection. Most families do not have a distinctive appearance that makes them easy to recognize at a glance.  they are, however, the basic subdivisions of the Apoidea; the major families are described below.

Colletidae. These bees differ from all others in that the glossa or tongue is broad and blunt or two lobed. In this feature they resemble must and hence have been regarded as the most primitive bees. the broad tongue, however, may be an adaptation for painting the interior surfaces of the cells with the secretion that hardens into a cellophane like a membrane characteristic of colletid nest. All colletid species are solitary

Hallictidae. Members of this enormous worldwide family are often called “sweat bees” Because some of them are attracted to perspiration after they land to lap it from the skin, they may sting it caught under clothing  or against the body.

Because of their great abundance, halictidae are extremely important in the pollination of vegetation and crops.

Andrenidae. This large family of short and bees makes left in the soil that consists of burrows with the number of branches, each ending in a cell. In most species the cells are lined with a layer of waxlike material. Andrenids are solitary or communal, and they pollinate many trees, shrubs, and herbs. They are increasingly important in the pollination of commercial crops.

Megachilidae. One of the principal characteristics of this large, worldwide family is the pollen carrying brush, or scopa, on the underside of the abdomen of females ( except for parasitic forms).  Some for parasitic forms some species make burrows in the ground or in pc stems species make burrows in or pithy stems. Most, however, Most, however, appropriate holes made in dead loads by beetles, or in the ground by various burrowing insects. Other species constructs cells in exposed situations.  Unlike holy the megachilidae do not line their cells with a secreted material. instead, they bring material such as leaves, pebbles, down, or resin from outside the nest for construction of the cell lining or of the entire cell. They are solitary, with the exception of few communal species. Various parasitic genera lacks scopas and place eggs in the cells of other bees.

Megachilidae are important  pollinators of many plants. The alfalfa leaf-cutter bee is even more important than the alkali bee in alfalfa pollination,  and a significant industry has developed around it.

Anthophoridae.  This large and diverse worldwide family of long tongue bees contain three subfamilies. The first, the Nomadinae, consists of parasitic bees that lay their eggs in the cells of other bees. The subfamily Anthophorinae contains a large number of hairy, robust bees that are solitary or communal. Most construct burrows leading to cells that are thinly lined with a waxy secretion.

Apidae. This family differs from all other bees in that pollen brush, which is  restricted to the hind leg, is reduced to a row of long hairs surrounding a smooth space on the tibia.  Thus , these are the only bees in which the pollen carrying arrangement can be described as a pollen basket , or corbicula. The family is divided into four major groups,  of which the first, the Euglosini, or orchid bees, is found only in the American Tropics. The species consist of middle sized to large, often brilliantly metallic. With their large size and furry covering they are able to control their body temperature better than most insects.  the nest containing their primitively eusocial colonies are made in cavities such as old mouse nests. Each large, overwintered queen forms its own nest in the spring and rears a group of workers, much smaller than itself, who then take over foraging activities while the queen lays eggs.

Bumblebees are important in the pollination of natural vegetation.  Some have commercial importance, especially in seed production of red clover.  In New Zealand, this forage Crop produced no seed until bumblebees from England where produced.

Stingless honeybees.  The third group,  the tropical stingless honey bees,  ranges in size from the smallest of all bees two species larger than honey bees.  Although their stings are reduced and do not function, many species are by no means defenseless.  Attack consists of biting and crawling into the eyes, ears, nose, and hair of animals that disturb them. Nests are constructed of cerumen,  a mixture of resin and wax, with mud sometimes added. The brood cells, unlike those of true honey bees, open upward and are arranged in horizontal combs or in clusters.

Stingless bee colonies vary from a few hundred up to the largest colonies of all bees, with more than 100,000 individuals.  each colony contains a queen that becomes swollen with eggs and unable to fly. Young queens, rather than old queens as in true honey bees,  leave to establish new colonies. No parasitic stingless bees exist; a few species, however, live by robbing.

True  honey bees. The  fourth and last group of Apidae is the Apinae. It contains only the genus Apis,  the true honey bee, which consists of about five species. Once restricted to Europe, Asia,  and Africa, the common honey bee has since been introduced into all parts of the world. originally it was the European races that were carried to other continents.